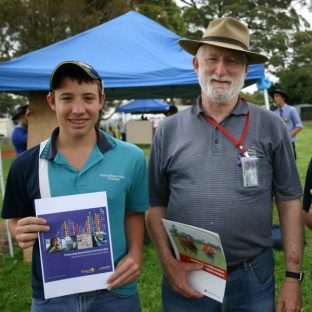 “As the son of a QLD dairy farmer, I’ve worked out over the years that dairy farming is pretty much another word for bankruptcy, especially if the price of milk is low. This is going to be a problem in the future because if primary producers don’t get much money for milk, then they won’t want to go into the dairy industry simply because they aren’t getting out what they put in. If you got up around 4.30am daily, 365 days a year and worked hard milking cows, planting crops, fixing machinery, etc, until 7pm in the evening and then looked at the monthly milk cheque to see what you are getting, you would lose hope very quickly. A lot of this at the moment is caused by the supermarket milk wars, which has put the average price of milk to the same as what it costs to produce it.

During the January 2011 floods, the impact on my father’s farm was disastrous, not just with fences and roads, but it had a big impact on the cows too. Because he lost most of his summer corn crop for feed, he had to buy his neighbour’s barley crop, another expense. With mastitis and other bovine sickness in the herd from the wet weather, it dragged him down deeper. In the end it caused a loss of over two hundred thousand dollars. Another uncertainty in the future is the carbon tax.”

This was part of the written response I received from Tyson, one of my former Agricultural Science students after I asked him to tell me about his future in farming.

Tyson is an incredibly thoughtful young fellow whom I have been honored to come into contact with in the past couple of years. He is typical of a lot of the farmers kids I’ve encountered. There is an inbuilt work ethic that seems to come with the territory, an understanding that farming in a family business requires everyone doing their part. You get that feeling from being around him, that the future will be in good hands.

Tyson tells me neither he nor his brother will continue to dairy, like their father and dad Steve thoroughly supports that idea. He sees no future for them either.

In the year since the supermarket price wars were established by Coles, at least thirty QLD dairy farms have discontinued operating, and I am told there are a couple more around Gympie about to join the ranks. Each are good operators with excellent farms, but due to age, and their children earning a better deal through other work, there is little choice. We have also lost the young and innovative.

The price wars have had an impact on dairy farms all over Australia, but what makes it so hard for operators in QLD, WA and many in Northern NSW is that they are chiefly supplying to the retail market, in the form of drinking milk. States such as Victoria are faring better because they have an  industry that is not totally reliant on retail milk, and can export products such as dried milk powder and butter.

Discount and branded milks that belong to retailers like Coles, Woolies and Aldi are understandably enticing to supermarket customers; most people like the idea of saving on their grocery bills. What consumers may not know is that milk processors such as Dairy Farmers and Pauls make less from discount milk and their own brands suffer in sales. The profitability of the processors is impacted, and that’s reflected in the prices they’re prepared to pay farmers which puts downward pressure on the farm-gate price.

Queensland farmers like Tyson’s father who are part of the Dairy Farmers Milk Cooperative have experienced pay cuts. At September last year, he was receiving 35 cents per litre of milk used for manufactured products. This is considerably below the cost of production.

So where do we, the consumer come into the equation? If discount milk is as unsustainable as farmers, dairy co-operatives and even Woolworths are saying, then the resultant scenario will not please consumers either. Whilst milk is used as a “drawcard” to entice customers to buy at places such as Coles, there may just be an ultimate backlash. If you are happy drinking UHT from some other country, you can finish reading here….

It may be a simplistic summation of events, but dairies closing in considerable numbers in one state means less domestic milk, and more chances of milk from interstate or ultimately overseas from places like New Zealand.  This is allegedly happening now in QLD and WA. It is certainly feasible to bring milk in, but who bears the cost of items such as deisel and refridgeration? Are we going to experience a huge rise in milk costs when it is decided that discount milk is no longer feasible by supermarkets such as Coles? Could this ultimately affect the supplies in southern states whereby profitable milk for export is diverted to fill in for low domestic supplies on other states?

As consumers, we have quite a few options. We can completely cut off from the supermarkets and purchase from some of the other smaller producers and co-operatives that exist. There are quite a lot of great brands about, offering some beautiful products; names like Barambah, Over the Moon, Ivyhome and Cooloola.

If you live in a one supermarket town like me, or near a big supermarket and you want to make your contribution to preserving dairy farming in Australian states that operate on domestic milk, walk past the $2.00 milk.  Not only are you bringing fair play to a dying industry in certain states, you are paying respect to dairy farmers in all states and also ensuring your future supply of fresh milk.

It is so terrible to see good operators and innovators having to leave this industry. At the end of the day, you can’t blame them. Farming may be a lifestyle, but one that relies on reasonable returns for very long days and inputs. Trouble is, when farms also disappear, they affect the surrounding areas with loss of business to other service providers who supply fuel, seed, machinery, etc.

The future is secure with young fellows like Tyson. It will be interesting to see where he ends up. At the moment he is talking about a trade. On behalf of us I wish you well and hope that your family ultimately find the support to keep going in a very challenging time for dairy. It cannot be done alone; we have to ensure this crazy situation does not continue.

8 thoughts on “The Milk Wars Will Hurt Us All…”